TALKS ABOUT THE OLYMPICS IN JAPAN 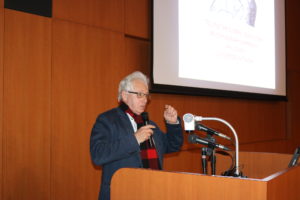 For seven years prior to the London 2012 Games I carried out ethnographic research with local communities most directly affected by the creation of a new Olympic Park In East London. Subsequently I carried out a further round of research  into the local  impact of the 2012 Legac

y.n my presentation I will  identify some of the key issues of  social theory, research methodology , and public policy  that emerged from this research and draw out its implications for researchers who are currently engaging with   Tokyo 2020.  I will  also draw on this longitudinal study to consider the role which ethnographic methods can play in creating and sustaining a platform of public participation and dialogue around the Olympics and their community impact, especially in relation to processes of  gentrification . This will focus on work recently carried out  with residents moving  in the ex-Olympic  Village in East London and an on- going project to build a heritage trail in Queen Elisabeth OIympic Park. I will conclude by looking critically  the official Olympic audit strategy and argue that an ethnographically grounded approach to the evaluation of mega  events is much appropriate.

This is an edited version of a talk given to the opening session of ‘Cartography on the Front Line’ seminar series, at the British Library on October … END_OF_DOCUMENT_TOKEN_TO_BE_REPLACED

In memory of Mantas  Kvedaravicius,documentary film maker, killed in Mariupolis,, aged 43, by  Russian Federation  forces on April 4 2022. This text … END_OF_DOCUMENT_TOKEN_TO_BE_REPLACED

I recently had the experience, fortunately an unusual one, of being snubbed. Blanked Out. Given the cold shoulder. The bum’s rush.   … END_OF_DOCUMENT_TOKEN_TO_BE_REPLACED