Our New book from Mica Press 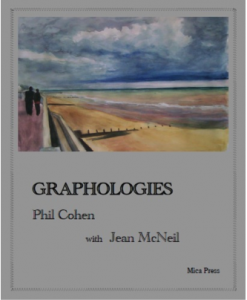 A deliberately hybrid text, the fruit of a partnership over many years between a poet/ethnographer and a painter who have mutually enriched each other’s understanding of the meaning of place, Graphologies takes a line of thought for a walk across poetry and the visual arts, autobiography and fiction, cultural and literary studies, exploring the emotional and narrative hinterlands of the commonplace.

The sparkling Introduction outlines the rationale of its poetics, while the paintings, photographs, maps and other illustrations add an important dimension to the book, extending its appeal to a wider audience.

Part 1 is then a sequence of poems in which familiar objects, encounters, or relationships have in some way become strange or other. The poems are counterpointed with paintings by Jean McNeil which invoke a sense of transient things arrested in their moment of manifestation or imminent departure : a tide that is on the turn, a glimpse of a landscape from a train, a passing storm… She is attracted to elements of strangeness in familiar scenes: an unusual light, surprising arrangements of shapes.

In Part 2 short prose poems explore the memoryscapes of a childhood in which intimate spaces of   fear and delight become disembodied as they are refracted through the trauma of the Blitz.

Part 3,  a fictional memoir, ‘Like as Not’ features the mysterious  K. He recalls a journey of self-discovery through the surreal landscape of his childhood and youth, growing up in a dystopian society of the future where ‘soapspeak’ and ‘knowgov’ are the only permitted discourses. The pervasive sense of personal dislocation, of lack of concordance between the official map and the actual unfolding territory of a life results in a series of phantasmagoric events ending  in a suicidal sea voyage.

The sometimes hidden reference point for much of this work is the East Anglian countryside and coast where the authors have both lived over the past 20 years, providing a focus for their various preoccupations with the liminalities of the commonplace. Several critics have already had a chance to review the book.  Read what they have said here: Graphologies Critics Reviews

Phil Cohen came to creative writing through the practice of ethnography and through the painting of his partner, Jean McNeil. He has recently published On the Wrong Track? East London and the Post-Olympics (Lawrence and Wishart) and a memoir, Reading Room Only (Five Leaves). His poems have appeared in various magazines, e.g.  Agenda, Soundings, and Critical Quarterly. Material Dreams, a collection of writing on memory and narrative, is forthcoming from Palgrave,Macmillan. He is Emeritus Professor of Cultural Studies at the University of East London. Website and blog: www.philcohenworks.com.

Jean McNeilstarted to paint in her late thirties, studying at the Camden Institute, City Lit (with Cecil Collins) and Hornsey Art School (then Middlesex Poly). For the past two decades she has been inspired by East Anglian land and seascapes and now lives in Wivenhoe near Colchester. She has had solo exhibitions at the Wivenhoe Gallery; Les Livres and Digby Galleries, Colchester; the John Jones Art Centre, Dryden Street, Original and Highgate Galleries, London; and the Smee Gallery, Norfolk. Her work is in many private collections. Website : www.jean-mcneil.co.uk

This is an edited version of a talk given to the opening session of ‘Cartography on the Front Line’ seminar series, at the British Library on October … END_OF_DOCUMENT_TOKEN_TO_BE_REPLACED

In memory of Mantas  Kvedaravicius,documentary film maker, killed in Mariupolis,, aged 43, by  Russian Federation  forces on April 4 2022. This text … END_OF_DOCUMENT_TOKEN_TO_BE_REPLACED

I recently had the experience, fortunately an unusual one, of being snubbed. Blanked Out. Given the cold shoulder. The bum’s rush.   … END_OF_DOCUMENT_TOKEN_TO_BE_REPLACED