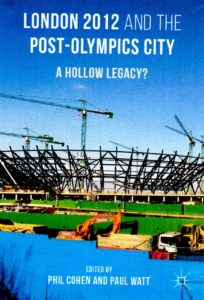 The strap line for 2012 was ‘Inspire a Generation’, and with the advent of the Rio Games a new chapter in Olympic history is  being  written – now is the time  to both look back and forward , and reach a considered verdict about how far that promise has been delivered.

The London 2012 Olympics are widely seen as a success story. In the referendum debate the Brexiteers  made much  of a moment in which the nation came together to surmount its internal   divisions and triumphantly  stood on its own feet  to show its best face to the world. Even if the moment did not last long,  there is still an official optimism that   2012 will provide a lasting legacy of benefits to the host communities of East London.  As always there is a counter-narrative, in which 2012 is the same old Olympic story of broken promises and tarnished dreams.

This book puts in question these formulaic evaluations and the assumption about sport, regeneration and the city which underlie them.  It brings fresh evidence, original insights   and new perspectives to bear on the Post Olympic debate. And it looks forwards from  Rio  to the  Tokyo Olympics as well as back at London 2012.

Our contributors represent a broad spectrum of opinion and the book  is inter-disciplinary in scope. It  will be of interest not only to academics, students and practitioners in the fields of Olympics and mega-events studies, urban regeneration, planning, and community action, but to anyone concerned with the future development of our cities and the fate of those who live on its margins.

Phil Cohen is Emeritus Professor in Cultural Studies at the University of East London and Research Fellow at the Young Foundation. He is author of  the widely acclaimed On the Wrong Side of the Track: East London and the Post Olympics (Lawrence and Wishart 2013). Other recent books include Reading Room Only:memoir of a Radical Bibliophile (Five Leaves 2013) and Graphologies  (Mica Press 2014). Material Dreams:maps and territories in the un/making of modernity is forthcoming from Palgrave.

Paul Watt is a Reader in Urban Studies at Birkbeck, University of London.. In addition to undertaking research (with Jackie Kennelly) on the 2012 Olympic Games and deprived East London youth, his areas of interest include social rental housing, urban regeneration, the post-industrial working class, suburbia and suburbanization. Paul is co-author (with Tim Butler) of Understanding Social Inequality (Sage, 2007) and  co-edited Mobilities and Neighbourhood Belonging in Cities (Palgrave 2014).

This is an edited version of a talk given to the opening session of ‘Cartography on the Front Line’ seminar series, at the British Library on October … END_OF_DOCUMENT_TOKEN_TO_BE_REPLACED

In memory of Mantas  Kvedaravicius,documentary film maker, killed in Mariupolis,, aged 43, by  Russian Federation  forces on April 4 2022. This text … END_OF_DOCUMENT_TOKEN_TO_BE_REPLACED

I recently had the experience, fortunately an unusual one, of being snubbed. Blanked Out. Given the cold shoulder. The bum’s rush.   … END_OF_DOCUMENT_TOKEN_TO_BE_REPLACED